Giles Bergel (University of Oxford) will be presenting his paper, ‘Computer Vision, AI and Textual Studies: The State of the Art’, at 5.30pm on Tuesday, 17 March 2020. The talk will take place in the Cardiff University’s John Percival Building, Room 2.01. 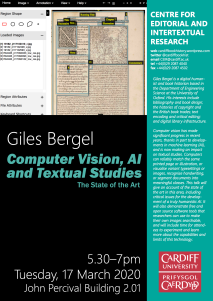 Computer vision has made significant progress in recent years, thanks in part to developments in machine learning (or ‘AI’), and is now beginning to make an impact on textual studies. Computers can, for example, reliably match the same printed page or illustration, or visualise variant typesettings or images. More challenging applications, such as OCR for handwriting, or segmenting documents into meaningful classes, are areas of active research. This presentation will give an account of the state of the art in this area, including several challenges and critical issues for the development of a truly humanistic AI. It will also demonstrate free and open source software tools that researchers can use to make their own images searchable, and will include time for attendees to experiment and learn more about the capabilities and limits of this technology.

END_OF_DOCUMENT_TOKEN_TO_BE_REPLACED

Owing to the planned industrail action, Dr Mark Towsey’s talk in Cardiff on Tuesday, 25 February 2020 has been cancelled. We will reschedule for next academic year. With apologies for any inconvenience this has caused.

Owing to the disruption to the rail services by Storm Ciara, Dr Joanna Taylor’s talk in Cardiff today has been cancelled. We will reschedule for later this semester or next academic year. With apologies for any inconvenience this has caused.

Owing to the COVID-19 pandemic, Dr Giles Bergel’s talk in Cardiff on Tuesday, 17 March 2020 has been cancelled. We will reschedule for next academic year. With apologies for any inconvenience this has caused.

Joanna Taylor (University of Manchester) will be presenting her paper, ‘Fitpoet: Walking with Wearables and Dorothy Wordsworth’, at 5.30pm on Monday, 10 February 2020. The talk will take place in the Cardiff University’s John Percival Building, Room 2.01, and will be followed by a wine reception.

—and not simply by the fact that this shading of
forest cannot show the fragrance of balsam[.]

The message at the heart of Eavan Boland’s poem, ‘That the Science of Cartography is Limited’, is a straightforward one: that maps are good at representing where something is, but not at showing why it matters. Digital maps exaggerate these limitations. Notwithstanding attempts to represent digitally the experience of standing in a location (Google’s Street View being the most obvious example), digital maps – like their analogue precursors – cannot comprehend an embodied sense of place. This paper seeks to demonstrate incorporating embodied data alongside a literary text in a mapping environment might transform both how we read, and how we understand the role of embodiment in historical and contemporary place-making.

To do so, it takes as a case study one particular text: Dorothy Wordsworth’s epistolary account of her pioneering ascent of England’s highest mountain, Scafell Pike, on 7 October 1818. It reads this letter alongside data gathered from a recreation of this walk—precisely 200 years later—by a party of researchers, artists and mountaineers who followed in Wordsworth’s footsteps. In part, this was a recreation of an important moment in British Romantic literature and mountaineering history. But, as this paper claims, the recreation was also an opportunity to reflect on the relationship between active reading and digital technologies, wherein the maps created by walking this route might transform the ways we read and respond to the texts the initial ascent inspired. The paper’s ultimate claim is that bringing these two types of data—those generated by author and by reader—together can foreground a phenomenology of place that induces new readings both text and map. END_OF_DOCUMENT_TOKEN_TO_BE_REPLACED